Liverpool claimed a dramatic 2-2 draw at home to West Bromwich Albion today in the Premier League, thanks to Divock Origi’s injury-time equaliser.

The draw came at a cost though, with Dejan Lovren picking up an injury, having to go off with his leg in a brace after a nasty tackle from Craig Gardner.

With this in mind, here are five things learned from today’s game: 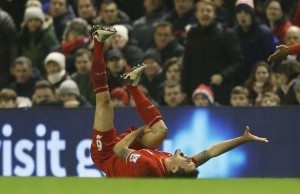 The 26-year-old was taken off on a stretcher, and blood was pouring from his knee, after the rough tackle from Gardner.
There was no action taken by the referee towards Gardner for the tackle, to the anger of Jürgen Klopp. It is a blow for the Croatian, who had only recently come back into the side after Mamadou Sakho also having injury problems.
Ironically, Lovren was replaced by Divock Origi, who fired home the injury-time equaliser.