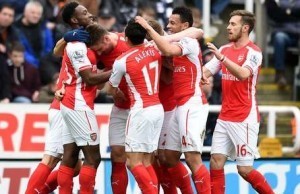 3-0 against a solid Swansea side signifies how far Arsenal have come on this season.

With consistent performances since the beginning of the season, it looks as if Arsene Wenger is finally getting the best out of his side, with Mesut Ozil being key to that.

Along with Alexis Sanchez‘s top class performances and the goals from Olivier Giroud, it is now hard to ignore that Arsenal could be within a shout of winning the Premier League title, especially with both Chelsea and Manchester United looking disjointed.

We shall see if the Gunners begin to drop out as expected, but do no be surprised if they stay up the top and fight with Manchester City right until the final day this season.