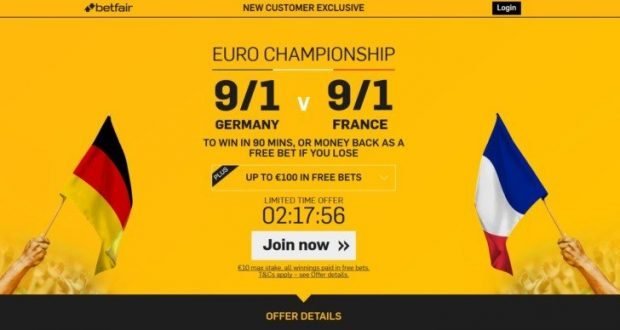 Germany vs France Predictions & Preview? The winner will meet Portugal in Sunday’s final at the Stade de France! Hosts France (2.75) will face Germany (2.95) in the second semi-final of the European Championships tonight at the Stade Velodrome, Marseille; kick-off 8pm (BST). 9/1 Germany to win or 9/1 France to win =>

Joachim Low’s side kick off their Euro 2016 semfinal on tonight as Germany Euro 2016 Squad face the opponents Didier Deschamps’s side and France Euro 2016 Squad in Stade Vélodrome, in Marseille, France.

Germany had to see off Italy in the quarter-finals via penalties following a 1-1 draw after extra time, whereas France demolished a valiant Iceland team 5-2 in their last eight game.

The winner will go on to play Portugal in the final, after they defeated Wales 2-0 in last night’s semi-final thanks to goals from Cristiano Ronaldo and Nani.

Germany boss Joachim Low will be without suspended centre-back Mats Hummels, as well as the injured duo of Sami Khedira and Mario Gomez.

On the other hand, France manager Didier Deschamps welcomes back defender Adil Rami and holding midfielder N’Golo Kante from suspension.

France have previously won the Euros twice, once in 1984 (when they hosted the tournament) and once in 2000. Germany have won the competition three times in their history, after winning the title in 1972, 1980 and 1996.

Here are Germanys previous results from the latest 5 football games:

Here are France previous results from the latest 5 football games:

This prediction is a tough one to call considering the pedigree of France in major tournaments they host. France are known to make slow starts and grow in stature as tournament progresses and are exactly showing the same. Their quarterfinal display against Iceland is a miniature of that, but the problems at the French defense still remains. On the other hand, France are yet to face Germany which is a tough opponent in the tournament. France must be play at their best to stand a chance against the Germans tonight.