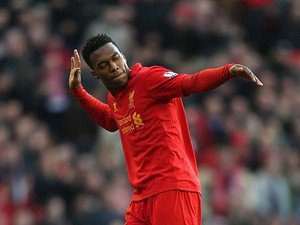 Manager says striker will not be leaving Anfield

Jurgen Klopp has warned any clubs wanting to buy Daniel Sturridge this January that the striker is not for sale and WON’T be leaving Anfield.

Sturridge has been linked with a move away from Liverpool recently after falling down the club pecking order, and with rumours circulating about a potential fallout with Klopp behind the scenes.

Sturridge has been absent from Liverpool’s past two matches against Sunderland and Leeds with a calf problem, and has yet to return to first-team training. Klopp confirmed that he will not be available to play when the Reds travel to Bournemouth on Sunday.

“There is absolutely no idea to sell anybody from the first-team squad. It wouldn’t make sense.

“Unfortunately Daniel is not in training. That’s what I’m most concerned about, more than transfer rumours, I’m prepared for January. What you ask me will be funny I’m sure.”

Sturridge’s injury has allowed Divock Origi to make his mark in the team, scoring in both the Leeds and Sunderland games,

Klopp said: “He was ready for the specific moment. I think everybody could see the difference.

“He is still 21, and he has had not much match time. He had very little rhythm. But always working, never moaning. It was really nice to see.”