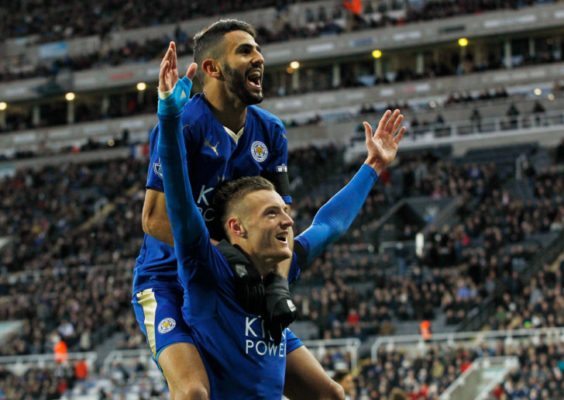 Who would’ve thought Leicester would be top?

Top of the class and top of the table, The Foxes have been immense this campaign. Vardy’s consecutive goal scoring and sensational form  from Maherz  has enabled to Leicester to pick up points in every game apart from Arsenal.

Injuries have plagued the blue half of Manchester, but the strength in depth have enabled City to remain in the title pack. A fully fit Sergio Aguero and Vincent Kompany could steer City to the 3rd title. The Speculation over Pellegrini has overshadowed the successful Champions League group which has given the club a great chance of progressing.

Spurs have had a great season with young talent really expressing themselves. The arrival of Dele Ali has given White Hart Lane a boost as the youngest has scored vital goals and maintained his place in the team.

An improvement on recent years, however Louis Van Gaal has come under attack over his style of football. The calm build approach is frustrating loyal fans, who are used to fast wing play. The Red Devils are still in the hunt for the title even the mediocre start.

Alan Pardew’s summer signings have done the trick with real Premier League experience joining the club. Yohan Cabaye has been a real revelation, controlling the midfield. The Eagles are capable of beating anyone on their day and could easily finish in the top 7.

Watford are back in the Premier League and this time they are going to stay! An incredible spirited start to the season. The long and slow ground  redevelopment is coming to a close where as Watford are only just beginning. A win against Liverpool has been the icing on the Hornets cake will provide momentum for them to keep pushing.

When you think of West Ham this season there is only 1 word what comes to mind, away. The Hammers have been hugely successive on the road winning at Anfield, Stamford Bridge and The Emirates to name a few. Slaven Bilic has successfully implemented his playing ideology which has paid off, the club will be aiming for European football next season, ahead of their move to the Olympic Stadium.

Liverpool started slow to the season, but after appointing Jurgen Klopp the outlook was brighter. A shock loss to Watford has seen the Reds slip down the table. Could it be to a big of an ask to qualify for the Champions League

Across the park from Anfield, Everton have had a similar season. Unpredictable results have put The Toffee’s mid table. On the bright side Lukaku has been in immense form as he continues to develop at Everton.

Mark Hughes has continued to show his qualities as a manager , as he continues to push Stoke up the table. A good cup run has also lifted spirits at The Britannia.

Southampton are no where near the former side they were. From challenging in the top 4 to hopefully obtaining Europa League football.

Tony Pulis will have another Relegation fight on his hands as West Brom sit towards the bottom of the table. Saido Berahino has been disappointing since hinting he wanted to leave the club.

Bournemouth have been superb this season, Eddie Howe has maintained his style of play whilst being plagued with injuries. A season defining win at Stamford Bridge has invigorated the player to continue fighting for Premier League safety.

A shocking season for Chelsea has seen The Champions sack the physio, slag of players and part ways with their most successful manager. Guus Hiddink will need to work in order to turn their season around.

Norwich continue to fight for their Premier League survival. A convincing win at Old Trafford has strengthened their case.

Newcastle have once again been poor, a city of hope and expectation is yet again being let down. Steve MccLaren has tried his best to get the best out of the squad but they are simply not good enough. Newcastle will be fighting until the end to ensure their place in the Premier League next season.

Swansea have slipped down the league after a run of poor results seen the end of Gary Monk. The long term serving manager and player was unfairly ousted, as the board  try and turn around their season.

Sunderland continue to fight on with the appointment of Big Sam injecting believe in the fans. Like previous years it looks like club will be fighting to the end to stay up.

Overshadowed by Chelsea, The Villains have had a terrible season, players have been accused of not trying or caring for the club.  Tim Sherwood, like Gary Monk, unfairly ousted. Remi Garde has took over and results are yet to pick up.