Who makes our starting XI after game-week 7?

After another exciting weekend of Premier League football, it’s time for SillySeason to put together their Team of the Week.

After massive wins for Tottenham Hotspur and Arsenal, it was all smiles in North London, but it’s a Manchester team that sit top of the tree after United beat Sunderland 3-0 at Old Trafford.

Chelsea dropped more points after drawing 2-2 at St James’ Park to struggling Newcastle United, while Crystal Palace saw off Watford in the lone match on Sunday.

West Bromwich Albion host Everton tonight in the last game of the weekend schedule, but here is our Team of the Week. 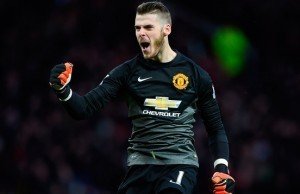 Yes he was against Sunderland and rarely tested, but on Saturday he was the only goalkeeper to keep a clean-sheet.

Wayne Hennessy kept one yesterday for Crystal Palace against Watford, but David de Gea gets the nod for us after a turbulent summer.

His future was in the air and his mind was away from football, according to Louis van Gaal, but since his return he’s shown why Real Madrid wanted him with several top class saves.