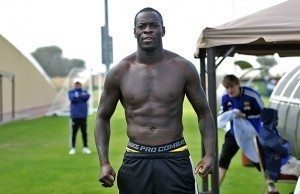 Top 10 Strongest Footballers in The World

You probably have guessed once or twice about which players might be capable of making this shortlist. Is it Cristiano Ronaldo, Mario Balotelli, Vincent Kompany or Zlatan Ibrahimovic? Well, there is only one way to find out and that’s by reading this article on the Top 10 Strongest Footballers in The World.

Here are the Top 10 Strongest Footballers in The World :

In tenth place on the Top 10 Strongest Footballers in The World is the Swedish star footballer Zlatan Ibrahimovic. The Swede, who currently plays for Manchester United, was very influential in last season’s Premier League. But previously to that, he played for PSG. Paris Saint Germain has dominated the top tier of French football and most of this glamour has been credited to the strength of the Swede who helped them dominate by scoring endless goals.

Zlatan Ibrahimovic is not only very strong but is also very skillful and acrobatic. This makes him very lethal in attack. He is very tall and uses his strength in the air , making him oftentimes unbeatable.