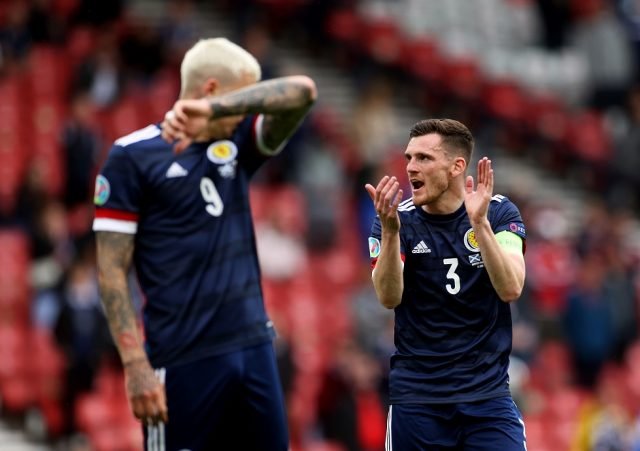 There is strong competition within the Scotland squad for the Euro 2020. Head coach, Steve Clarke has picked Chelsea’s Gilmour, fellow midfielder Turnbull of Celtic and Rangers right-back Patterson in the final 26-man squad for the tournament.

The Scottish peopla have high hopes for their country after watching them qualify for the tournament. Led by Andy Robertson, the team can really make an impact against England, Czech Republic and Croatia in Group D of Euro 2020.

Here is all the information you need about the Scotland Euro 2020 Group, Group Stage Schedule and all the National Team players playing in Euro 2021.

Scotland’s chances to advance from Group D are not really that strong in terms of the odds (6.50) as they have been tipped to drop out.

Scotland national football team Euro 2020. Here are all players who made it into the 26-man squad for Scotland in the Euro 2020. It should consist of 23 outfield players and 3 goalkeepers. Here is the Scotland squad for Euro 2021:

Scotland Defenders in Euro 2020? Here are the footballers that will play in Scotland defence in Euro 2021:

Scotland Midfielders in Euro 2020? Here are the footballers that will play in Scotland midfield in Euro 2021.

Below are the following Scottish football players who represent Scotland’s best footballers and will try to win the European Championship gold to Scotland. Here are the key football players in the Scotland squad for Euro 2021:

The Liverpool defender is Scotland’s captain and leader. He is their most impactful player on both ends of the pitch. The 27-year-old excels in bombing forward down the left flank and delivering balls into the penalty box.

With Kieran Tierney playing a more defensive role as a left centre-back, Robertson is allowed more forward to go ahead. He takes on much of Scotland’s creative responsibility on his shoulders.

This will be only Scotland’s third appearance in the European Championship. They last featured in the tournament in 1992 and 1996. They failed to make it out of the group stages in both occasions.

If you have any questions about Scotland’s Euro squad in 2021 so you can easily drop a comment below and we’ll try to answer the questions of the Scotland squad for Euro 2020 as best as we can.

This article will be updated continuously with the starting line-ups, facts, odds, statistics on the players and the Italian national team ahead of Scotland’s individual European Championship matches.

For instance, we will try to answer the most common questions that you may have regarding Scotland’s European Championship squad in 2021. Watch & Bet here =>

Find out more about at Scotland official website and www.uefa.com.