All the teams playing in the 2017 Emirates Cup 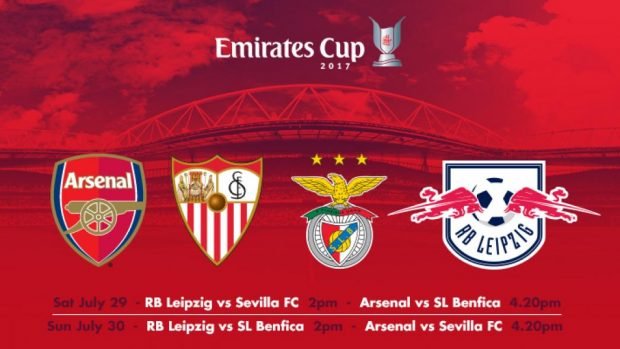 Joining Arsenal at the Emirates Stadium for this summer’s pre-season tournament will be current Portuguese champions Benfica, Europa League winners in 2014, 2015 and 2016, Sevilla; and RB Leipzig, who have been hugely impressive during their first season in the Bundesliga.

This will be the ninth tournament of the Emirates Cup, which has been quite a regular fixture in the club’s pre-season schedule since moving to Emirates Stadium. As with the previous Emirates Cup tournaments, fans will enjoy two matches each on both Saturday and Sunday, with one ticket giving access to both matches on a particular day.

The kick-off times for the Emirates 2017 on both days are 2pm and 4.20pm, ticket are priced from only £25 for adults and £12 for concessions for each day. Members will be offered a priority window within which they can buy tickets for the Emirates Cup 2017.