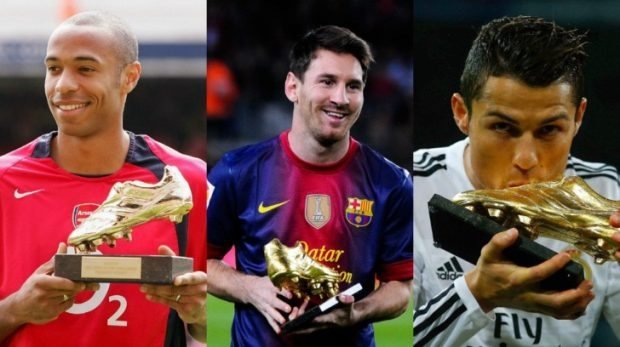 Back in 1968 when they introduced the European Golden Shoe award it was called the “Soulier d’Or” (Golden Shoe). The Golden Shoe was an award which was awarded to the players with most league goals. Watch & Bet Sports =>

That included most goals in Cup competition and European goals were not included, only respective leagues. The award was awarded by the L’Équipe magazine since its inception in 1968. During the 1996-97 season that changed to the European Sports Media.

From 1968-1991, the Golden Shoe was awarded to anyone regardless of the toughness of the league or the number of games the player had taken part in. During this period, Eusébio, Gerd Müller, Dudu Georgescu and Fernando Gomes each won the Golden Shoe twice. That doesn’t mean these players did not deserve the Golden Shoe (Shoe).

After a number of complaints, The European Sports Media has awarded the Golden shoe to players according to points obtained. This allows players in tougher leagues to claim the award even if they scored fewer goals than players in weaker leagues. Watch & Bet Sports =>

Who won the inaugural European Golden Shoe Award in 1968?

That was the most league goals in Europe during 1968 and Eusébio was awarded the first Golden Shoe. Eusébio received the Golden Shoe award again later in 1973 when he scored 40 goals.

On 24 May 2020, Robert Lewandowski was presented with his first European Golden Shoe award after netting 41 goals in Bayern Munich’s triumphant Bundesliga campaign in 2020/21. He comfortably outscored the likes of Lionel Messi (30) and Cristiano Ronaldo (29) in 2020/21.

On 1 Agust 2019, Ciro Immobile was presented with his first European Golden Shoe award on Wednesday after netting 36 goals in Lazio’s triumphant Serie A campaign in 2019/20.

On 16 October 2019, Lionel Messi was presented with his sixth European Golden Shoe award on Wednesday after netting 36 goals in Barcelona’s triumphant La Liga campaign in 2018/19.

European Golden Shoe Winners list – who has the most Golden Boots in the world?

Lionel Messi is the only player to have won the European Golden Shoe six times. He also holds the record for most goals and most points in a single season (50 and 100 respectively, in 2011–12).

Cristiano Ronaldo is the only player to have won the European Golden Shoe four times.

Which player has the most Golden Shoes? Here is the list of the Multiple winners of the European Golden Shoe Award.

He also holds the all-time record of 50 goals which was scored during the 2011-12 season. These two great legends of football have taken the world of football by storm over the last decade also sharing nine Ballon d’OR’s between them.

Who gets Golden Shoe if tied?

What happens if there are two top scorers? When the scoring charts end level, they don’t look at assists or the goals-per-game ratio, it is simply shared among the top scorers.

Christiano Ronaldo and Luis Suarez both have shared Goldeen Shoe in 2013/14, having scored the same number of goals and points.