How much prize money will each team get at the end of this La Liga season? 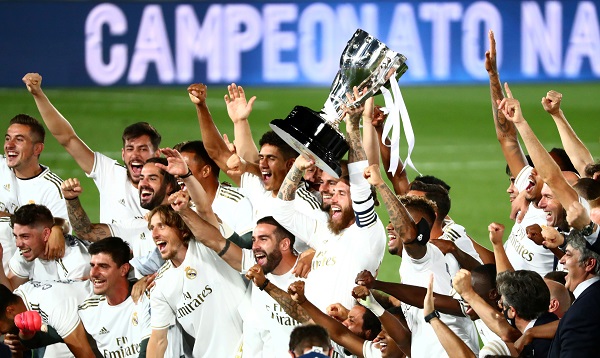 How much is the La Liga 2019 Prize Money Distribution & Breakdown 19/20? Previously known as the BBVA due to sponsorship reasons from Banco Bilbao Vizcaya Argentaria.

The BBVA was won by FC Barcelona last season and they won the title with a solid lead ahead of Atletico Madrid. This season it is Real Madrid who the Spanish La Liga title.

Spanish La Liga has signed a new collective TV rights deal for the Spanish division 1 which will come into play starting from 2019-20 season. Unlike the previous seasons, 2019-20 La Liga season will see a lot more balanced distribution of La Liga tv and central sponsorship money.

However, Real Madrid and Barcelona are both set to keep their usual earnings under the new system as well. Below is the entire prize money distribution system and how much every club in Spanish top flight will earn this season.

This is how the new TV money distribution system works:

Unlike the previous model, every top division club had to negotiate their own TV rights deals but La Liga passed historic bill in 2015 which ensured collective sale of La Liga tv rights both domestically and oversees.

Telefonica, Movistar bought the domestic live tv rights for around €1.89 billion in 3 year deal while MediaPro also splashed out €750 million for three years making it a total of €2.70 billion (£1.8 billion) over three year domestic deals.

La Liga are selling collective TV rights in oversees markets around the world. They increased their oversees TV money compared to previous deals.

1. Equal-share: 50% will be distributed equally between all 20 top flight clubs

2. Merit-Money: 25% will be distributed according to league positions based on last 5 years.

3. Resources-Generation: 25% will be distributed according to each team’s capacity of generating resources for example number of official club members, season tickets sold, attendance etc.

So the total money from both domestic and oversees three tv deals combined is around €2.65 billion (£1.8 billion). Which they will divide into three parts making prize money pool for each of the three seasons under the current TV deal period 2016-2019.

So the La Liga prize money pool for 2019-20 will be setup with two portions of money.

They divide the money equally between all 20 clubs and for 2019-20 season all La Liga clubs will get around €50 million each from this portion.

The prize money for the final amount has not yet been revealed for the 2020 season!

However, we do have the breakdown for this season from their TV right revenues and prize money from previous seasons!

With the previous system the top clubs tv rights money and bottom clubs was huge with Real Madrid and Barcelona pocketing as much as €140 million each with their individual deals. While bottom clubs like Las Palmas could barely make €18 million in tv rights money.

But a collective deal will enable even the bottom sides to make as much as €60 million per season. Also the new deal has a clause where Real Madrid and Barcelona won’t take any hit in their TV rights revenue. This enables them to continue earning in the region of €140 million a per.