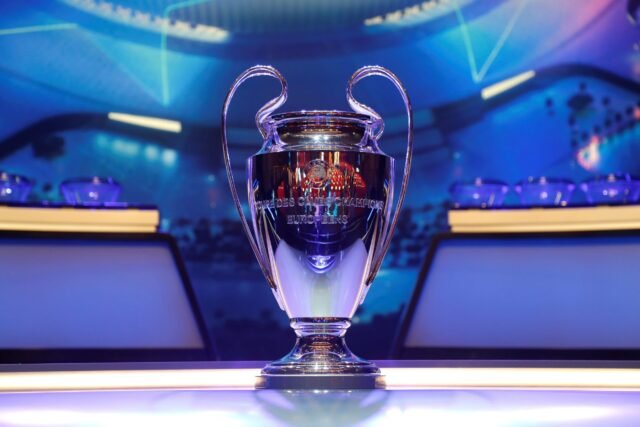 Who’s the favourite to win the Champions League this season?

We are now well into the Champions League group stages and there has already been shocks, thrills and spills across all 32 teams. It is however the usual suspects that are dominating most of their groups and there are now strong favourites emerging for the competition.

Last year’s winners Real Madrid will be looking to defend their title and are in a strong position already, topping Group F with three wins and a draw.

Elsewhere highflyers Manchester City continue to tear through the opposition under the tutelage of Pep Guardiola. The Citizens have a shiny new toy in Erling Haaland whose 20 goals across all competitions has aided them in topping Group G.

But where do the two footballing super-powers rank in the numbers? Let’s have a look at the top five favourites for this year’s Champions League.

It is Pep Guardiola’s Man City side who currently top the list of the favourites for this year’s Champions League in the sports betting. The Spaniard has been at the helm at the Etihad since 2016 and even after all his success on the blue side of Manchester, the famous big-eared trophy has so far eluded him.

It seems that every year for nearly half a decade has been ‘their year’ in Europe, but the six-time Premier League winners have increasingly fallen short, most recently in 2021 when they lost in the final to Chelsea.

One of the richest clubs in the world, City have access to a roster of talent that make the eyes water. Haaland, Cancelo, Kevin De Bruyne and Ederson are all arguably the best players in the world in their respective positions right now and could walk into essentially every club side in the world.

Their only weakness is seemingly themselves, accented by their continued failings in the latter stages of this tournament despite their performances. It is hard to argue against Cities position as favourites but only time will tell if Guardiola has ironed out the creases that have seen them fall short in recent years.

The second favourites are German giants Bayern Munich, who will be vying for their seventh European trophy. Die Roten have a 100% record in the group stages so far despite the loss of star man Robert Lewandowski to Barcelona in the Summer transfer window.

In his place they welcomed Sadio Mane from Liverpool along with Ryan Gravenberch and Matthijs De Ligt to strengthen the midfield and defence respectively. Alongside young talents like Jamal Musiala and Alphonso Davies and mainstays Leon Goretzka and Joshua Kimmich, Bayern have one of the strongest squads in Europe.

However, questions have been asked recently of head coach Julian Nagelsmann. Once considered the best young manager in the world, Nagelsmann joined Bayern from league rivals RB Leipzig in 2021.

The German has had an unsteady start to the Bundesliga season, winning just five of their first 10 games so far. Although their performances in the tournament have been strong so far, their could be trouble should results continue to go against him in the league.

Like City, PSG are one of the richest clubs in world football. And also like City, their roster shows that.

The names Lionel Messi, Neymar and Kylian Mbappe speak for themselves and on paper they are potentially the most feared front three in club football. However, their seems to be trouble in paradise.

French starlet Mbappe has become a wantaway player according to reports and his attitude is rubbing the likes of Messi the wrong way. The loss of the Frenchman would undoubtedly put a dent into Les Parisiens European dreams, especially after failing to win the big-eared trophy despite their riches over the last decade.

Despite their poor start in the league and a shock mauling at the hands of Napoli, Liverpool still find themselves in the top five favourites. The most successful British club in Europe, The Reds will be going for their record seventh title.

Mo Salah seems to have finally found his form again as Jurgen Klopp starts life without Sadio Mane. Though the acquisition of Darwin Nunez this summer is yet to pay off, Klopp has always steadily introduced new signings to the first team and it should not be long before he is firing.

Their league form is worrying however and their depth is weak especially in midfield, relying on the likes of James Milner and Jordan Henderson who have a combined age of 68.

Rounding out the list is the current-holders Real Madrid. Life has been good at the Bernabeu since Carlo Ancelotti arrived for his second spell in 2021.

Karim Benzema is in the form of his life at the 34-years-old and recently won the Ballon D’or for his efforts. The currently top La Liga having not lost a game at the time of writing.

However, despite their success, their team is ageing. First-teamers Luka Modric, Toni Kroos, David Alaba and Benzema are all aged 30+ and the heavy schedule could potentially affect them later on in the tournament.

However, there is no doubt that being underdogs suits Los Blancos down to the ground.