Inter Milan line up will be tricky to tell. Juve boss Allegri might make some changes in the squad and hence the predicted line up can’t be too easily guessed. So let us see:

In defence, Handanovic should return to goal for cup duty. Milan Škriniar, Alessandro Bastoni and Stefan de Vrij would cover the defensive line.

A three-man midfield Nico Barella, Marcelo Brozović and Hakan Çalhanoğlu should feature over Gagliardini and co.

In the wings, Ivan Perisic and Denzel Dumfries will cover both flanks. Edin Dzeko and Lautrao Martinez will both lead the line upfront. 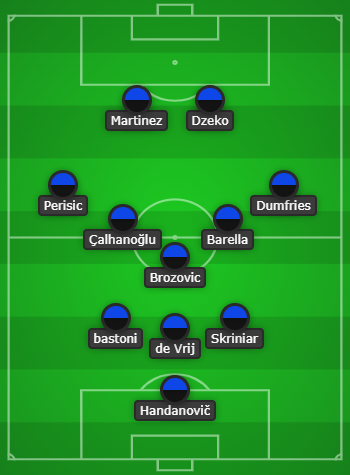 Inter Milan has seen an upturn in form since the break of the year and are currently leading the Serie A table.

This is the second time both teams will face this season and the first led to a 3-0 win in favour of Inter Milan.