A look at who the top four will face this year

The draw for the 2015/16 Champions League group stages took place today and SillySeason takes a look at who the Premier League top four will have to face in the competition’s first stage. 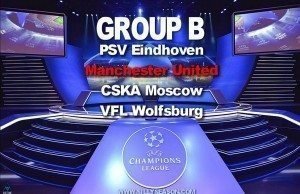 After beating Club Brugge 7-1 on aggregate in their two-legged qualifier, Manchester United were drawn in Group B alongside PSV Eindhoven, CSKA Moscow and Vfl Wolfsburg. Here’s a look at their group opponents:

PSV Eindhoven – This will be an interesting fixture for one particular United player. Memphis Depay moved to Old Trafford from PSV this summer and I’m sure he will have a welcome return to his old club.

PSV qualified automatically after being crowned champions of Eredivisie and their manager is is ex-Netherlands international star Phillip Cocu. Their main threat and stand-out player is their striker and number nine Luuk De Jong.

They have won the competition only once, during the 1987-88 campaign when it was known simply as the European Cup.

CSKA Moscow – The Russians also progressed to the group stage after being part of a qualifier, they beat Sporting Lisbon 4-3 on aggregate.

They are often a tough nut to crack, especially when you play them at their home stadium. They have one of the most intimidating fan bases in world football and it can be very cold during winter.

Their manager is Leonid Slutsky and he possesses a squad rich with Russian internationals. However, the main threat comes from Ivory Coast striker Seydou Doumbia, who has recently re-signed for the club on loan from AS Roma.

They also have an ex-United player in their ranks in Zoran Tosic.

CSKA have never won the competition.

VfL Wolfsburg – The German Cup winners qualified after finishing as runners-up in the Bundesliga last season.

Their boss is Dieter Hecking and they have a lot of quality attacking players at their disposal. Ex-Chelsea players Andre Schurrle and Kevin De Bruyne could be the ones to watch out for.

That is if De Bruyne stays at the club, he is strongly linked with a move to the Red Devils‘ local rivals Manchester City.