Lets have a look at the highest paid athletes in the world.

List of The Highest Paid Athletes in the World 2018 – Forbes

The 2018 world’s highest-paid athletes list is out and Cristiano Ronaldo has been kicked out of the top spot.

The soccer star was No. 1 for the last two years on Forbes’ annual list of the highest-paid sports stars, but taking over the reins now is boxer Floyd Mayweather, who earned a staggering $275 million between June 1, 2017 and June 1, 2018. The kicker? It was for one night of work. Mayweather went toe-to-toe with Conor McGregor on August 27 last year, which was enough to earn him that payout. Add in his $10 million in endorsements, and his take totaled $285 million.

This is Mayweather’s fourth time topping the list in the last seven years. 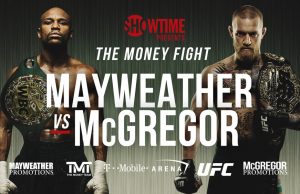 Floyd Money Mayweather tops Forbes’ annual look at the world’s 100 highest-paid athletes for the fourth time in seven years, thanks to a $275 million payday for his August boxing match against UFC star Conor McGregor. Mayweather unseats Cristiano Ronaldo, who held the crown the previous two years.

Ronaldo ($108 million) drops to third this year, with longtime rival Lionel Messi ($111 million) edging him out, after signing a new contract.

List of the Highest Paid Athletes in The World 2018

Here is the list of the highest paid athletes in 2018. Enjoy.

Mayweather, Ronaldo and Tiger Woods are the only three athletes to top the best-paid list over the past 18 years. Woods ranks 16th this year with $43.3 million.

The top 100 athletes earned a total of $3.8 billion in the last 12 months thanks to an hefty pay day for Floyd Mayweather  in one night after his fight with Mcgregor.