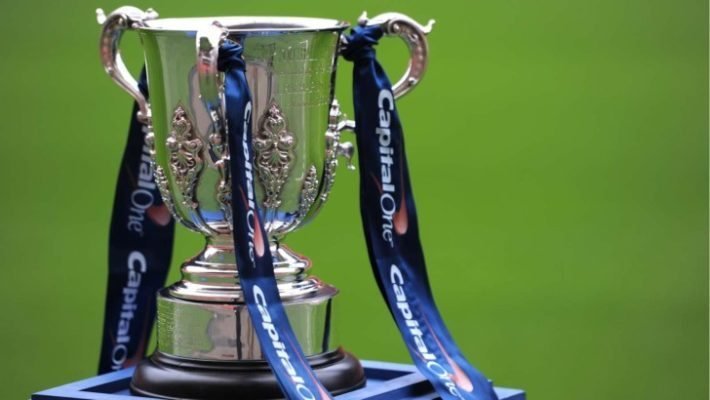 The fixtures will be played tonight and tomorrow night

16 teams, eight games and a chance for a place in the quarter-finals, SillySeason looks ahead to this week’s Capital One Cup ties.

Everton will see this as a massive opportunity to progress into the quarter finals and to get on the road towards that Wembley final.

The Toffees will look to use their home advantage and get their fans behind them to create a special Goodison Park atmosphere under the lights.

Everton have never won the League Cup, whereas Norwich have won the competition twice in their history in 1962 and 1985.

The home side are coming off the back of an away defeat to in form Arsenal, but the Canaries have lost their last two and shipped six goals in their last away game at Newcastle United.

This will be an intriguing match-up, even if it isn’t the prettiest of games.

This has the makings of a very exciting game, both sides are in great form in their respective leagues.

Steve Bruce’s Hull currently sit second in the Championship table, occupying the final automatic promotion spot as they bid for an instant return to the Premier League.

However, they are hosting Leicester City, who are in the form of their lives and have taken the Premier League by storm under Claudio Ranieri’s guidance.

The Foxes are fifth in England’s top flight, but the Tigers can be boosted by the fact that Ranieri has stated he will make several changes from the team that beat Crystal Palace on Saturday.

This could mean that the Premier League’s top scorer Jamie Vardy may not feature, which will be a relief for those Hull defenders.

This game is live on Sky Sports tonight and could be a very good battle indeed.

Sheffield Wednesday are showing promise under their new manager Carlos Carvalhal and look as if they have the makings of a team that can win promotion.

The South Yorkshire side are ninth in the Championship but are only four points off a play-off spot; and we all know how tight that division can be.

Despite this, they have to realise they are facing Arsenal who are hot property at the moment. Arsene Wenger’s Gunners are joint top of the Premier League table, only behind Manchester City on goal difference.

They also recently defeated Bundesliga champions Bayern Munich in the Champions League, so Wednesday must be willing to work hard.

These two teams have not had the start to the season they would have wanted, especially with the quality in both squads.

Stoke and Chelsea sit 14th and 15th respectively in the top flight and with players such as Xherdan Shaqiri and Bojan (Stoke) and Eden Hazard and Cesc Fabregas (Chelsea) at their disposal, they simply should both be a lot higher.

However, the Potters will go into this with a confidence about them. They are at the Britannia Stadium, so they know the home crowd will get behind them, and it is also probably the best time to play Chelsea given Jose Mourinho’s recent antics.

A good cup run could be exactly what both sides need to get their season’s back on track, so a victory in this game would be vital for either club.

Again, this is a meeting where both sides are struggling to get positive results in a harsh campaign.

New Liverpool boss Jurgen Klopp is yet to win since taking over at Anfield, he has overlooked three draws in his first three games.

One the other hand, Bournemouth manager Eddie Howe must be tearing his hair out with the bad luck his club have faced in their first ever term in the Premier League.

To add insult to injury, the Cherries’ have also shipped ten goals in their last two games after back-to-back 5-1 losses away to Manchester City and at home to Tottenham Hotspur.

Like the Stoke vs Chelsea tie, this could be one where the winner might kick-start an important run of form. It is also live on Sky Sports.

Another all Premier League tie, but this time between teams who are in decent form.

It has the feel of a tight game, after their previous meeting in the league at Selhurst Park finished 1-0 to City after a last gasp Kelechi Iheanacho winner.

City are strong at the Etihad Stadium and on paper look to be too much for Alan Pardew’s Palace.

However, the visitors will want to get one over on the league leaders, especially after back-to-back losses to West Ham United and Leicester City.

At the minute, this is a massive opportunity for Ronald Koeman’s Saints to go marching into the hat for the quarter-finals draw.

It’s the best time to play Villa, as they are bottom of the league and are without a manager after Tim Sherwood was sacked.

This means that the visitors may not be too interested in what happens in the cup and could be more focused on Premier League survival or even just finding a new manager.

Southampton sit in a comfortable eighth place after a late draw at Liverpool on Super Sunday, meaning their only negative going into this tie will be that Sadio Mane will be suspended after seeing red at Anfield.

Louis van Gaal’s United go into this game on the back of a 0-0 draw in the Manchester derby and will be looking to use home advantage to progress into the quarters.

However, they face a hard working Boro team who have got quality going forward through the likes of Stweart Downing and David Nugent. They will certainly give the Red Devils a good test.

Aitor Karanka’s Middlesbrough started the season as favourites to be promoted from the Championship and they are currently in fourth place just one point off an automatic promotion spot.

Their opponents are also fourth, but in the Premier League table, and are just two points off the summit.

Van Gaal maybe targeting winning this tournament as he bids to secure his first piece of silverware since becoming Manchester United chief.