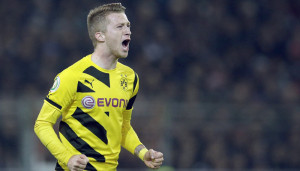 Marco Reus is next on our list, who is currently playing for Borussia Dortmund in the German Bundesliga.

The German playmaker made his name in the Bundesliga for Borussia Monchengladbach, before he completed a £14m switch to rivals Dortmund.

The forward, who can play across the front-line, is now rated one of the best players in the world and is wanted by several clubs across Europe.

FC Barcelona, Arsenal, Chelsea, Manchester United and Liverpool are all battling for his services as the attacker could leave Dortmund this summer.