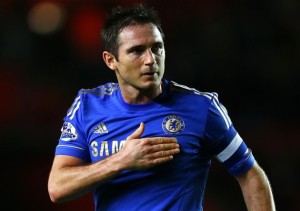 Another legend of not only Chelsea, but football in general.

Frank Lampard will sadly be leaving the Premier League this Summer and surprisingly ended his England career with Manchester City after spending a season on loan there.

However, he will forever be a Chelsea legend after making over 600 appearances for the club.

He is also the club’s highest ever goalscorer, which is an incredible achievement considering he’s a centre-midfielder.

Lampard is now set to start his MLS venture for New York City.