Liverpool are doing some expansion work on Anfield, whilst Spurs and West Ham have plans to change stadiums altogether in order to compete financially with the bigger clubs. The most seats in a stadium, the more in attendance, meaning the more money.

The biggest stadiums in the Premier League

So we all know the biggest stadium in the Premier League as it’s fairly obvious, but what stadiums make the top-10 list? Lets find out! 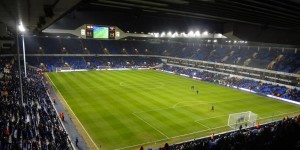 After numerous renovations of the stadium from 1899, White Hart Lane now has an all-seater capacity of 36,274.

White Hart Lane is Tottenham Hotspur’s ground and it is the tenth largest stadium in the Premier League.

The East stand of the White Hart Lane, known as the Worcester Avenue, holds the most fans followed then by the Paxton Road stand in the North.

Spurs may not be at this ground for much longer as plans are underway to see them rebuild a new ground which could be as big as a 60,000 seater.