Barcelona are one of the biggest clubs in world football with 74 trophies under their belt. They have a long-standing rivalry with Real Madrid any matches played between the two are called an El Clasico. Barca were founded in 1899 by a group of Swiss, English and Catalan footballers.

Barcelona Wage Bill 2022: Barca Players And Their Saleries In 2022!

In world sports, Barcelona are worth over $4.06 billion. They record an annual turnover of €840.8 million which makes them the fourth-richest club in the world. Fans are commonly known as Cules with an official anthem named “Cant del Barça”.

FC Barcelona is one of the highest paying La Liga teams in terms of weekly saleries to their football players and here is the full list of the Barcelona squad with their weekly Saleries and contract details. Some of the Barclona players’ weekly salary are unknown so no information is available on these players. Watch & Bet Fotboll live =>

Frenkie De Jong is Barcelona’s highest paid player with a weekly salary of £608,371. Frenkie De Jong has signed a new contract at the club last year which will see him stay put at Nou Camp until 2026.

Frenkie de Jong salary per week? Frenkie De Jong salary per week was already the highest in Barcelona before he signed the new contract. The new contract increased Frenkie De Jong weekly salary from £354,000 to £608,371 per week. The new weekly salary made him the highest paid player in FC Barcelona. Watch & Bet Football Live => 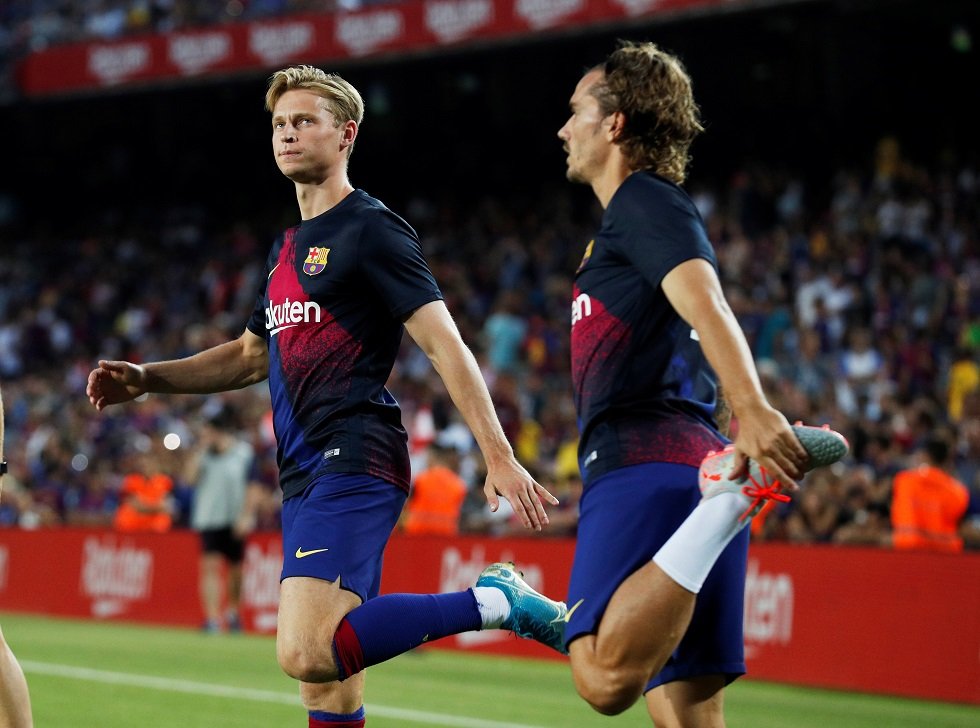 How much does Frenkie De Jong earn per week at Barcelona?

Frenkie De Jong weekly salary at Barcelona increased his weekly salary from £354,000 to £608,371 per week when he signed a new contract with the club which made him the highest paid player in FC Barcelona.

Frenkie De Jong is currently the highest paid player in FC Barcelona and his earnings per week are about £250,000 more than what Sergio Busquets, Jordi Alba and Robert Lewandowski earns per week. Watch & Bet Football Live =>

FC Barcelona is a team that has always been one of the best teams for many years. The club has made sure that they remain at the top with key signings from time to time. The LaLiga giants, however, have endured a slow start in the league this season as they currently sit fifth in the table.

Founded in 1899 by a group of Swiss, English and Catalan footballers led by Joan Gamper, the club has become a symbol of Catalan culture and Catalanism. Hence the motto “Més que un club” (“More than a club”). Unlike many other football clubs, the supporters own and operate the club. It is the second most valuable sports team in the world, worth $3.56 billion. It is also the world’s third-richest football club in terms of revenue, with an annual turnover of €648.3 million. Watch & Bet Football Live => 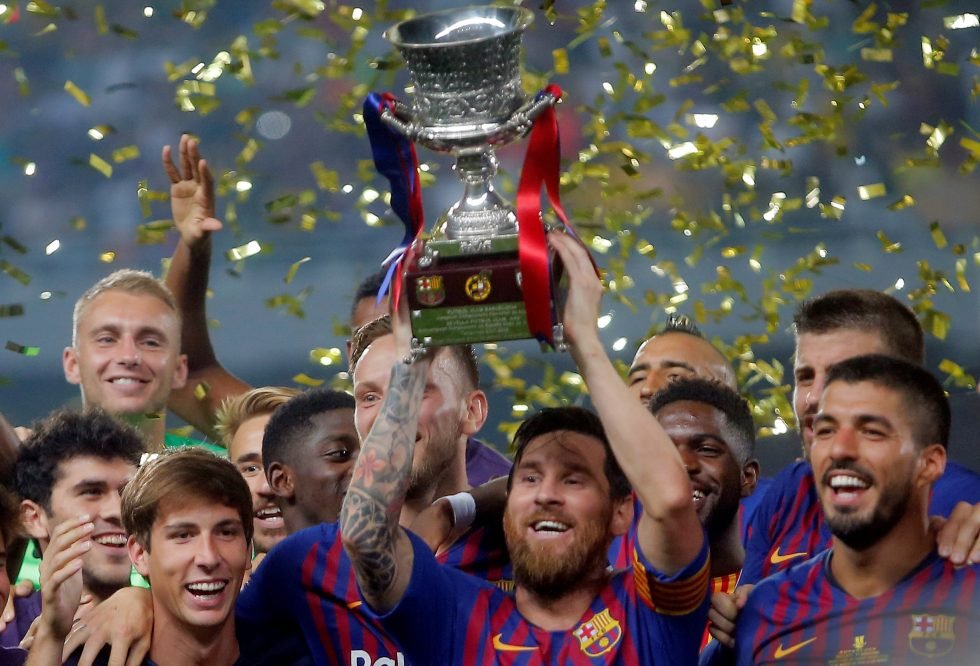 Also the record holder for the latter four competitions.

Barcelona was ranked first in the International Federation of Football History & Statistics Club World Ranking for 1997, 2009, 2011, 2012 and 2015 and currently occupies the third position in the UEFA club rankings.

Los Cules is one of three founding members of the Primera División that have never been relegated from the top division. Other teams are Athletic Bilbao and Real Madrid. In 2009, Barcelona became the first Spanish club to win the continental treble consisting of La Liga, Copa del Rey, and the UEFA Champions League. Also became the first Spanish football club to win six out of six competitions in a single year. Did so by winning the Spanish Super Cup, UEFA Super Cup and FIFA Club World Cup.

FC Barcelona players transfer news is something that constantly shows up. It’s no coincidence that it’s always talked about as it is one of the richest football clubs in the world.

Given the way in which the transfer market looks and how prices rise, they need to spend more and more money. The club has a lot of money but don’t spend if they don’t need to.

Barca is a team that is growing in Sweden. They are playing attractive football. Therefore there are many who want to see  FC Barcelona live stream and follow the team. They also usually participate in very goal-winning matches and it is often a joy to see when the club plays.

FC Barcelona live stream online free is something that is interesting to many. There are many different streaming sites, betting companies with betting offer but it’s only one where you can see FC Barcelona‘s matches in La Liga and the Champions League. If you want to see Madrid on TV and stream, there are many streaming services offering live stream. Then you can watch all TV broadcasts from both the native Spanish League and the cups and when they play in Europe.

Fixtures FC Barcelona? La Liga is determined after playing 38 rounds from August to May. That means 38 matches per season only in the league game. Then they also play the various domestic cups and the Champions League, which makes it easy to get around 50 or 60 matches in a season. That’s why FC Barcelona’s program is very packed and it’s often possible to play two or three matches in a week’s time.

When it comes to FC Barcelona fixtures and Barcelona schedule, it’s possible to see when the team is playing their next match in La League’s game schedule.

It’s easy to find when Barca is playing their next match. It is often that you play on Saturdays when it comes to league games and Tuesdays or Wednesdays when it is the Champions League that calls. To be absolutely sure we have collected all the matches in one and the same place.

Barca is a team that plays in the Champions League every season. During their years of the tournament, they have won the competition 5 times.

When do Barcelona play next? There are many who want to see the team play because of many reasons. They have many big stars in the squad while playing attractive football. In the next league game Barca play, they are favourites to win. To have Messi is a huge help.

As we mentioned earlier, FC Barcelona’s lineup is full of stars. The team’s latest coach, Ernesto Valverde. If we look at FC Barcelona players and the squad, they have many world-class players. It has been thought of before they made their signings and many of them have been made in view of the future and players who may take a starting place in a couple of years. He has picked up which players he wants in the squad.

There is constant news around the Spanish club. Today, they are challenging some of the world’s biggest clubs. FC Barcelona Players Salaries? If we look at FC Barcelona salary list, they will undoubtedly pay some of the highest in Europe. However, one has a bonus system which means that players reach up to high sums fairly quickly. This is to get around the FIFA Financial Fair Play.

FC Barcelona news is often about the game but it is also very interesting about other parts. Especially regarding about FC Barcelona tickets, shirt and match kit. There are also many who are looking for a logo or wallpaper to have their mobile or tablet.

Q.1. Who is the highest-paid player in Barcelona?

Frenkie De Jong is Barcelona’s highest-paid player with a Weekly Salary of £608,371.

Q.2. How much money do Barcelona players make?

Barcelona’s list of player salaries is very interesting. However, we have already prepared it for you above!

Q.3. What was Messi’s salary per week?