Middlesbrough football club is based in Middlesbrough, North Yorkshire, England. They are currently competing in the EFL Championship, the second tier of English football. Starting in 1876,  Borough have played at the Riverside Stadium since 1995, which is their third ground since 1889.

Middlesbrough won the League Cup in 2004. It is the club’s first and only major trophy. So here we look at the history and also the Middlesbrough Players Salaries 2018/19.

Middlesbrough’s nicknames are; The Boro and Smoggies. They will play in the Championship for the 2018/19 season. The nickname “Smoggies” was first used as a derogatory term by opposing supporters relating to the industrial air pollution ‘smog’ that covered the town, but it was later adopted by Middlesbrough fans as a badge of pride.

Middlesbrough were a prominent and consistent Premier League team in the 90’s and early 00’s. But after being relegated to the Championship in the 2008/09 season, Middlesbrough suffered a dramatic downfall. They had to sell a lot of players to lower the wage bill. The Midlands club stayed in the Championship eight seasons until 2016 when they gained promotion back into the Premier League.

However, Middlesbrough only lasted one season in the Premier League in 16/17 and in 17/18 they were playing back in the Championship again.

The club’s main rivals are Sunderland and Newcastle United. There is also a rivalry with fellow Yorkshire club Leeds United.

Middlesbrough’s home ground is at Riverside Stadium in Middlesbrough. It can host up to 34,000  fans so it is a reasonably sized stadium which would be big enough for the Premier League.

Middlesbrough kit is red with white.  The current shirt crest has a red lion. 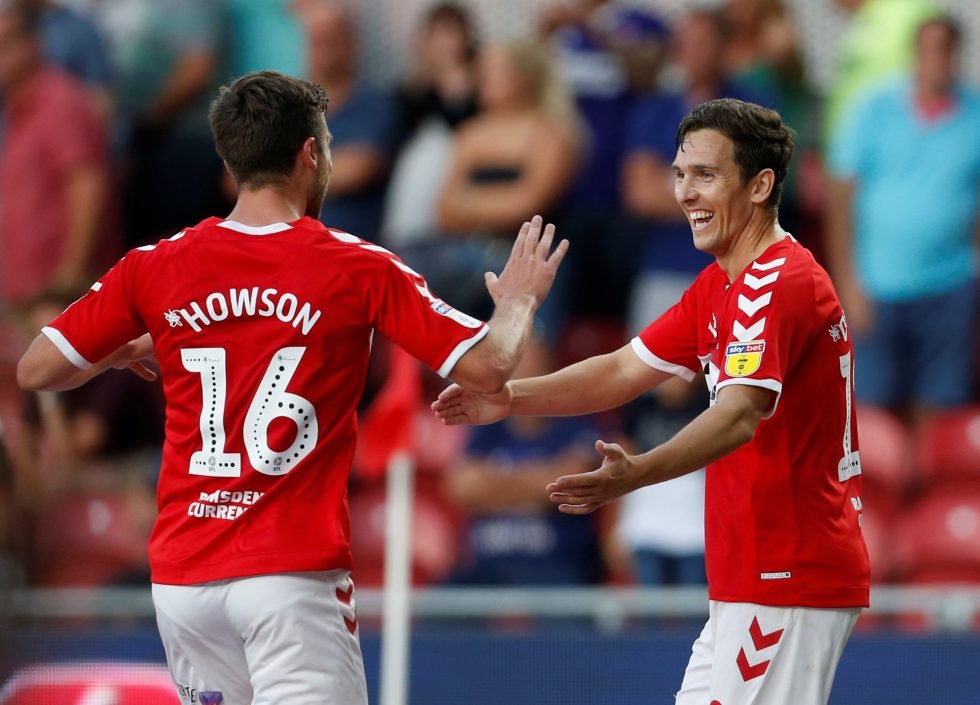 Middlesbrough Players Salaries 2022? The average weekly-wage is just under £20k per-week in the Championship. So Middlesbrough had to sell their players or slash players wages after their relegation from the Premier League. They could not afford a lot of the players wage that were Premier League wages. Unfortunately, clubs don’t release their wage bill information.

The accounts for the year up to June 30, 2017 show the overall income of Boro was £121 million – which was £100m up from the previous 12 months. This would have undoubtedly been due to Boro’s time in the Premier League in 16/17. However,it’s not cheap to run a football club so costs were up too. The overall running costs of the club more than doubled from £40m to £89m. Meanwhile wages increased due to being in the Premier League with the wage bill going up to £57.1m. So players like Alvaro Negredo, who arrived at Boro on loan, had to go back to his parent club due to his high wages- £100,000 per-week (reportedly).

So these players individual wages are not known but they are likely to be around or just under £20,000 per-week each.

And that is the list of Middlesbrough players salaries and market value.

Middlesbrough FC (Football Club) commonly referred to as The Smoggies or simply known as Boro is a English football club.

The club was founded in 1876 and are competing in the Championship, the second tier of English football.

The team plays its home matches at the Riverside Stadium and is said to be a tricky ground for oppositions to win.

After that a shift of ownership took place and the club was reconstructed.

They had to start in division 3, but would climb up and played in the Premier League season 1996-97.

Boro were one of the founding members of the Premier League in 1992 and became one of the first clubs to be relegated from it following the 1992–93 season.

The club’s traditional kit is red with white detailing.

Their kit has remained the same over the years with a red shirt, either red or white shorts, and socks.

Boro have used several types of crests throughout their history, the most recent of which featues a lion rampant was adopted in 2007.

The club has won one major trophy.

Middlesbrough players transfer news is pretty inactive these days. The highest transfer fee that the club has paid for a player is £13,5 million for Afonso Alves in 2007 from Dutch side Heerenveen.

Alves turned out to be huge flop for the Boro, as the club was relegated to Championship in 2009.

In recent transfer window the club has brought in 16 players and sold/released around 20 players.

There is always some news and rumours when it comes to Middlesbrough.

They have so many potential talented players in the club and will hope to return to the English top flight.

There are various English sites and newspapers with the Middlesbrough transfer rumours.

As mentioned above Boro mainly share rivalries with Sunderland and Newcastle United, they also share a local rivalry with Leeds United.

There are many fans who want to back the team and see Middlesbrough live stream and follow the club every week.

Middlesbrough live stream online free is something that interests many. There are many different streaming sites, gaming companies and betting pages with live stream. You can watch all TV broadcasts from the English League and the various domestic cups the club takes part in.

Fixtures Middlesbrough? The Championship is determined after the end of 46 gameweeks.

This means that the club will be playing 46 matches per season in the league.

Then, they also play in the various domestic cups and in Europe if only they qualify, which isn’t impossible for now.

This makes it more or less than 50-60 matches in a season.

That’s why Middlesbrough‘s schedule is generally hectic. There’s nothing new about the fact that the club plays two matches in a week sometimes.

When it comes to Middlesbrough fixtures and Middlesbrough schedule, it’s possible to see when the team is playing their next match in Championship’s game schedule.

It’s easy to find when Middlesbrough is playing their next match. They often play on Saturdays when it comes to Championship games and to be absolutely sure we have collected all the matches in one and the same place.

When do Middlesbrough play next? There are many who want to see the team play because of various reasons.

Having many talented players can only help them in future.

They disappointingly got relegated from Premier League along with Hull City and Sunderland.

Sometimes we notice the news surrounding the English club. They are looking to challeng some of the biggest clubs in the England.

If we look at Middlesbrough’s payroll, they do not pay some of the highest in Europe. But the promotion to top flight football could help their star players to earn more.

Middlesbrough news is often about the game but there are other interesting things to look at. Like, Middlesbrough’s tickets, shirts and match kits. There are many who are looking for a logo or wallpaper to have on their mobile or desktop.

Check out the twitter and official website to find out more about the club. Watch & Bet Football Here =>