Arsenal kick-started their Premier League campaign with a shock 2-0 defeat at home to London rivals West Ham United this afternoon.

The Gunners are hotly tipped to win their first league title in 11-years, but they’ve already suffered their first set-back thanks to a nightmare debut from Petr Cech.

Goals either side of half-time gave the visitors all three points at the Emirates Stadium and leaves Arsene Wenger‘s men bottom of the table after game-week one.

So despite being tipped for a league title before the season started, Arsenal have already suffered their first defeat and are already playing catch-up to their title-rivals.

What did we learn though from Arsenal’s 2-0 defeat to West Ham?

SillySeason pick out their five things learnt from the shock defeat. 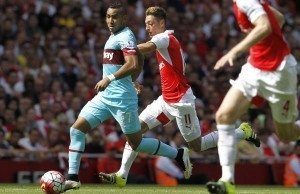 Now the old saying is ‘it takes overseas players time to settle in England and in the Premier League, however that is seemingly not the case for Dimitri Payet.

Signed over the summer by Slaven Bilic, the midfielder looked right at home in the heart of The Hammers‘ midfielder and out-shined the likes of Santi Cazorla, Mesut Ozil and Aaron Ramsey.

Payet‘s quick-feet and trickery caused all kinds of problems for Arsenal and they simply couldn’t get near him for half the match.

His freedom in the centre of the park helped West Ham control the game and his lightning pace aided numerous counter attacks for the visitors.

A top signing from West Ham and if he can keep it up every week, he’s certain to help guide The Hammers to a successful season.