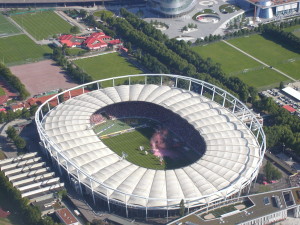 Mercedes-Benz Arena is a home ground for Vfb Stuttgart which can hold a capacity of 60,469 spectators.

The stadium was originally opened back in the 30s, but it’s had a lot of work and renovation done since then, with the latest coming in 2005.

Another German stadium that has had previous names and another one that was used for the German World Cup back in 2006.