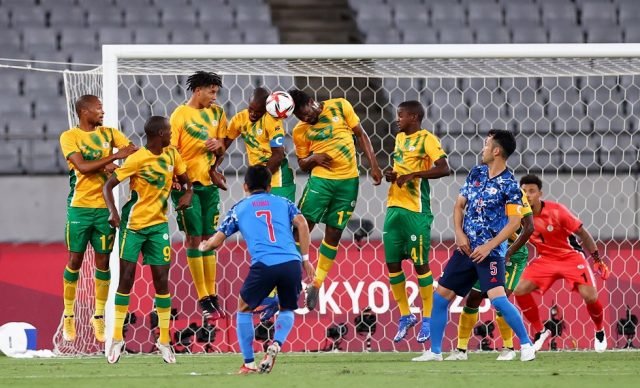 Who will win Olympics gold in football 2021?

Will one of the favorites Spain, Brazil, Germany or Argentina win gold in Olympics soccer 2021? Or will one of the underdogs Saudia Arabia, Japan or South Korea win the men’s Olympics Football tournament in Tokyo?

Who will win Olympics 2021 Football Predictions

If you are looking to pick a winner for this year’s Olympics soccer, look no further because we have all the Olympics Football winner odds right here.

2021 Olympics Football have got off to a stellar start. Germany, Brazil, Argentina, Spain are all heavy favourites to win this tournament. Brazil are the reigning champions from Rio 2016, when they beat Germany in the final through penalties. Watch & Bet Here =>

Japan as host of the 2021 Olympics had automatic qualification. The 2021 Olympics Football are being held across 5 stadiums in Tokyo, Japan. We are about to see some of the world’s best young talents showcase their skills on the biggest stage. Each team is allowed three players above the age of 23 to help them win Gold.

Who will win Olympics Football odds?

Who will win Olympics Football according to the betting odds? The bookmakers have handed Spain with the best odds to win.

Who will win gold in Olympics soccer? Odds, favorites, best bets to win 2021 men’s tournament in Tokyo. Here are the odds for which country will ultimately lift the Olympics trophy:

Best Olympics Football 2021 Winners Odds – Who are the favourites?

This year Spain have been handed the best odds to win due to the sheer talent pool they command. In the last Olympics, Brazil came out winners with Neymar stealing the show. The forward helped his nation win Gold by beating Germany in the final on penalties.

Some of the more prominent names from that year’s Brazil team have gone on to become world stars now. As fans, we are always on the lookout for prime youth talent who will break out during these important moments.

Countries like Saudi Arabia, New Zealand, Honduras or Romania might not rank high on the FIFA rankings charts, but they have managed to qualify and will definitely excite viewers.

The Spain U23 squad made it into the semi-finals of the U23 European Championships this year. Spain have only participated in three Olympic football competitions and last won Gold in 1992. They returned to the podium to win silver in 2000 in Sydney, Australia.

Brazil are available at 7.70 with bet365 to continue their dominance and reach the very top.

The Brazilians are serious competitors in every Olympic tournament. They are one superpower who aims to win Gold every year and are the reigning champions. Brazil have qualified for seven of the last nine Olympic Games; claiming two bronzes, three silvers and – at last – gold in Rio.

They failed to win a medal only once in 1976 and were very close to not qualifying for the 2021 Tokyo Olympics at all. Argentina had the chance to eliminate the tournament’s winner completely in the final round of qualifiers. Hertha Berlin’s Matheus Cunha netted twice as they ultimately ran out 3-0 winners.

Who are the Olympics Football 2021 underdogs?

Argentina are at 17.00 with bet365 to finally clinch Olympic gold!

As a nation, Argentina are riding high on their Copa America triumph this year, ending a serious trophy drought in recent decades. They will be aiming to let their youth talent pool impress once again on the international stage.

Though they disappointingly lost 3-0 to arch-rivals Brazil in the final game, Argentina won the tournament overall. Fernando Batista coached the side well with Brighton midfielder Alexis Mac Allister named as star of the tournament.

This Argentina side has played just thrice in the past 18 months but did beat Denmark and Saudi Arabia in the warm-up games.

South Korea are available at 25.00 to slip in an surprise us all.

Kim Hak-bum’s young side have a formidable status after qualifying through the AFC U-23 Championship. They beat China, Iran and Jordan and all others to top their group. We can expect them to enter the tournament with confidence despite a goalless draw with Egypt Under-23s and a 3-1 defeat to Brazil Under-23s in warm-up friendlies last week.