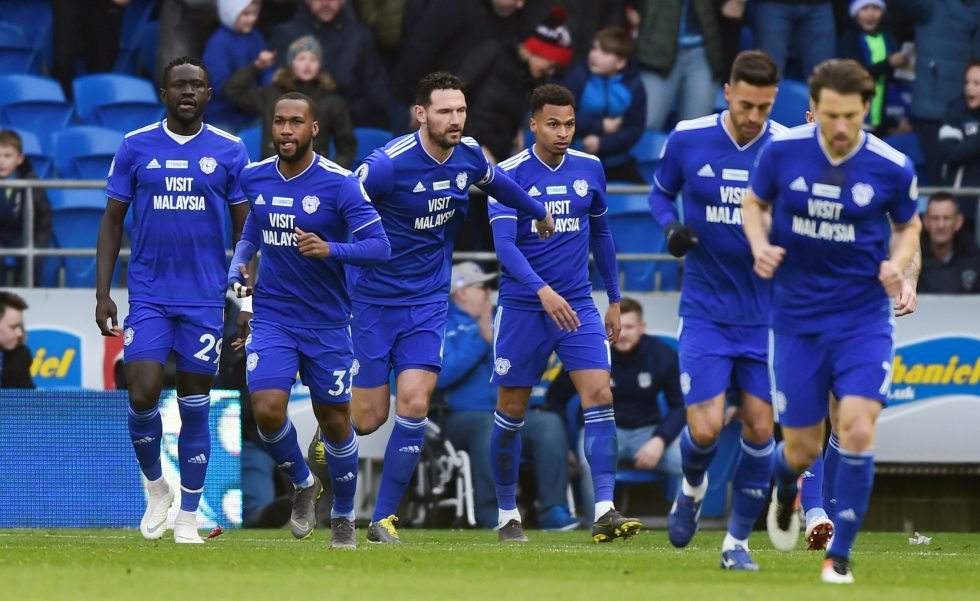 Cardiff City Football Club is a Welsh Premier League club based in Cardiff, Wales. They have been a consistent Championship club for a long time, but have now been promoted to the Premier League for the 2018/19 season.
The team’s longest period in the top league of English football was between 1921 and 1929. Since then, Cardiff City have spent seven seasons in the top-flight- the most recent season was in 2013–14. They were relegated after just one season however. Last season, Cardiff clinched 2nd place in the Championship table in 2017–18, earning them promotion back to the top English league. Here we look at the Cardiff City squad information for the 2018/19 Premier League season.

Cardiff City are also known as The Bluebirds as the club’s home colours are blue and white, which lead to the nickname The Bluebirds.

The rivals of Cardiff City are other Welsh sides such as nearby locals Swansea– which is known as the South Wales derby and Bristol City which is known as the Severnside derby. Ironically, the only Welsh side in the Premier League in 2017/18 were Swansea but they were relegated at the end of last season and Cardiff City have now taken their place.

Cardiff City squad plays their home games at Cardiff City Stadium. The stadium holds a capacity of 33,280 people and is the second largest stadium in Wales (after the Millennium stadium).

They have been playing at this stadium since 2009 after their former stadium Ninian Park was demolished. The new stadium is opposite the former Ninian park site.

It was a sad day for the entire Football fraternity as Cardiff City’s club record signing Emiliano Sala was lost on his way to Cardiff from his former club Nantes as the plane in which he was travelling went missing. After a long tenure of searching, the player’s body was found near the crash site of the plane.

The player was signed in the January 2019 transfer market on a £14.76 million transfer fee from Nantes, but the player never arrived at the club given his sudden demise.

The other two players who were brought into the Welsh side in January 2019 are Oumar Niasse from Everton on loan and Leandro Bacuna from Reading on an undisclosed fee.

Here are the players who were sent out of the Cardiff City squad in the January 2019 transfer window.

Here are the players who were signed by Cardiff City in the Summer 2018/19 transfer window.

The Cardiff City squad line up 2018/19 season consists of these players.

Here are the goalkeepers in the Cardiff City squad. Neil Etheridge is the main number one goalkeeper for Cardiff City and so Cardiff signed Englishman Alex Smithies in June 2018 for around £3.5 million. The Welsh club have three goalkeepers on their roster at present.

Cardiff City squad are quite thin for options in defence. The Bluebirds have some experienced Championship centre-backs such as captain Sean Morrison and Bruno Ecuele Manga. But they don’t have a lot of quality in defence and they have struggled to adapt to the Premier League this season. Their defence has been the biggest reason for their downfall this season as they are currently stranded in the 18th position in the Premier League table and are favourites to enter a relegation battle.

Cardiff City squad have a few key players in their midfield which helped them to promotion. They have experienced and talented Icelandic international Aron Gunnarson who’s been at the club since 2011. Meanwhile, Joe Ralls is a key part of their midfield after making 37 appearances in the Championship last season and scoring seven goals and making five assists. Canadian winger Junior Hoilett is a dangerous player going forward after scoring nine goals and making 11 assists last season in 46 Championship appearances.

However, the arrival of the likes of Harry Arter and Victor Camarasa have not helped their cause this season.

Danish forward Kenneth Zohore is their main man in attack for Cardiff City. The 24-year-old is also a cousin of famous striker Didier Drogba. Zohore scored nine goals and made five assists in 36 appearances last season in the Championship. However, he has not been able to do much good for the Bluebirds so far this season.