From stadium size and cleanliness to capacity and fan experience, there are many factors that can impact the atmosphere. While every sport has a unique fan culture, so too does every city.

For example, most NHL arenas in Canada and the northern US States will sellout regularly, while teams in the Southern US have had issues filling stadiums. The Florida Panthers set a record low for attendance earlier this season, attracting a measly 7,311 fans for their match up against the Ottawa Senators

Also have a look at the following lists:

List of the Largest Stadiums in North America by Capacity 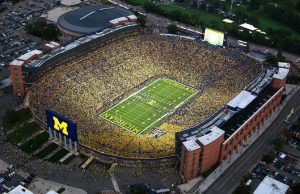 The stadium was constructed between 1926 and 1927 at the cost of $950,000 ($13.1 million inflation adjusted) and was officially opened on October 1st, 1927. It was later renovated in 2010 at the cost of $226 million. The record attendance at the Michigan Stadium was set on September 3rd, 2013 with an attendance of 115,109. The stadium has hosted several important events but has mostly been used for NFL games.

Here are the other stadium lists: