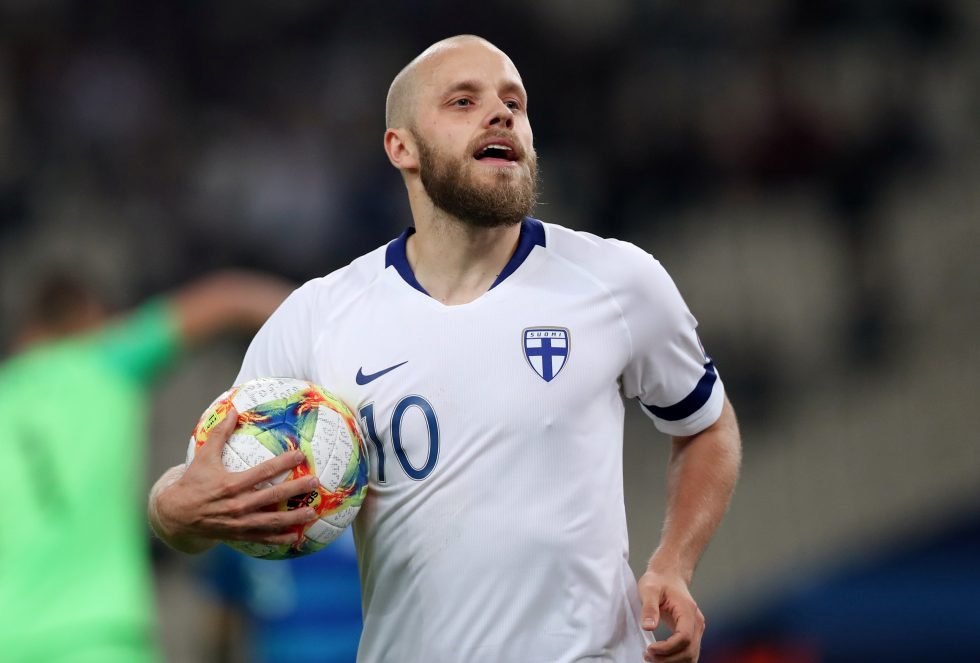 Finland’s Euro 2020 squad? Is Finland in the Euro 2020? Finland squad for the 2020 Euro? This is Finland’s first major tournament in the country’s history. The successful qualifying campaign was aided by the incredible performance of striker, Teemu Pukki. The Norwich forward scored 10 goals during the qualifiers to propel his team to the European Championship finals. Watch & Bet here =>

How good is Finland in football? The Eagle-owls have finally managed to squeeze through to a major tournament after coming close over the past two decades. They have a few players who are contracted to clubs in Europe’s top five leagues but majority of the team come from the more local European background. Pukki is their best offensive threat but there is a lot of experience in midfield and in defence.

Here is all the information you need about the Finland Euro 2020 Group, Group Stage Schedule and all the National Team players playing in Euro 2021.

Finland were put through a serious test during the qualifiers against teams who are even ranked higher than them. Italy ran out leaders with a perfect record but the Eagle-Owls had to fight off the likes of Greece, Bosnia and Herzegovina and Armenia to rank higher.

Finnish Defenders in Euro 2020? Here are the footballers that will play in Finland defence in Euro 2021:

Finnish Midfielders in Euro 2020? Here are the footballers that will play in Finland midfield in Euro 2021:

Finnish Forwards in Euro 2020? Here are the Finland Forwards that will play in Euro 2021:

Finland’s top goalscorer in Euro 2020 qualifiers (including qualifying and Playoff):

Pukki captured the attention of many with his heroics in the qualifier group stages. He also helped Norwich City gain promotion from the Championship to the Premier League, proving to be a lethal weapon in the top-flight. Even though the 29-year-old has seen a dip in form at club level, his finishing abilities still makes him standout as a dangerous player.

Lukáš Hrádecký is another key players in the Finish Euro Squad

There is a reason why the Finnish number one was voted their best players for three years in a row (2016,2017 & 2018). He is a natural leader and next in line behind, Tim Sparv to wear the captain’s armband.

If you have any questions about Finland’s Euro squad in 2020 so you can easily drop a comment below and we’ll try to answer any questions regarding the Finnish squad for the Euros in 2020 as much as possible.

This article will be updated continuously with the starting line-ups, facts, odds, statistics on the players and the Finnish national team before Finland’s individual Euro matches. In addition, we will try to answer the most common questions you may have regarding Finland’s Euro squad in 2020.

Find out more about at Finland official website and www.uefa.com.