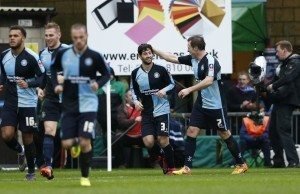 Oxford United stole the headlines for their cupset, but so many others came so very close to doing the same.

Wycombe Wanderers pushed Aston Villa all the way and managed to book themselves a replay at Villa Park thanks to a 1-1 draw on Saturday.

Eastleigh nearly stunned Bolton Wanderers but once again came away with a 1-1 draw, booking their replay at the Championship ground.

Bristol City of the Championship were moments away from beating West Bromwich Albion at The Hawthorns, but a late goal ended the game all level at 2-2.

League Two Portsmouth also drew 2-2 with Championship side Ipswich Town, and of course Exeter City got a credible 2-2 draw against Liverpool.