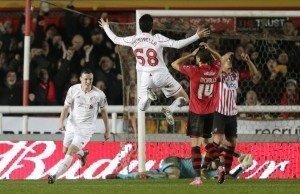 It would have been interesting to see what team Jurgen Klopp would have fielded if he didn’t have 11 injuries to contend with.

However, he was forced into playing some young faces and quite frankly, they didn’t make the cut on Friday night.

They struggled to overcome a League Two side and eventually came away with a 2-2 draw.

These youngsters at Anfield aren’t even that young in terms of footballing age anymore, and if they can’t see off a League Two side, then simply they aren’t good enough for Liverpool.

Not sure any of them that featured on Friday night will make it in Merseyside.