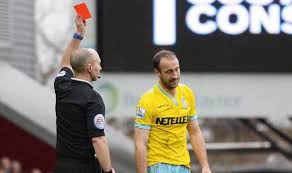 Crystal Palace earned an impressive victory against West ham United at Upton Park after Glenn Murray scored twice before being sent off in the second half . At the 69th minute Murray was very late with a foul on Reid and picked up his second yellow card. Crystal Palace won the game 1-3 against home team Newcastle United.