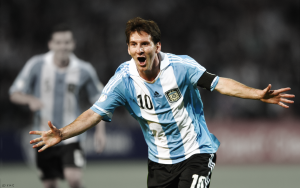 Number-one at so many things, and number-one on our list. Lionel Messi.

Messi has broken every record, he’s won everything, he’s just incredible to watch and he’s still at his peak.

However, for Argentina it’s a different story as he’s yet to win anything for his national side, despite the wealth of attacking options they have.

Messi has won an Olympic Gold Medal in 2008, but that is all so far for Argentina.