Some players are simply better for their club over their country, whilst other players just aren’t in a good enough national team to really compete during a World Cup or any other International competition.

Today’s SillySeason Top-10 is going to look at the best players to have not won anything with their country. Whether it be down to not being in a good enough national team, or just whether they cannot do it on the national stage, for some reason, these stars have not tasted success with their national teams.

For most of these stars, their lack of honours on the national stage are made up with their honours at club level, so lets take a look at some brilliant footballers who have not won anything for their country. 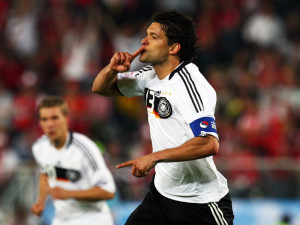 Staring the list of the Top 10 Great Footballers To Have Never Won A Major International Trophy is German veteran footballer Michael Ballack.

The 38-year-old, who retired in 2012, was never part of a winning team for Germany, and of course, wasn’t playing during their World Cup win last summer.

Ballack made 98 appearances for Germany, scoring 42 goals, but he never lifted a trophy with his national side.