One of the most Stunning Premier League moments ever. After 24 years without a title at Anfield, 2014 seemed to finally be Liverpool’s year. They were playing unstoppable football and were getting some incredible results, with a 5-1 win over Arsenal, 4-0 over Everton, 3-0 away at Man United and a crucial 3-2 win over Man City in what seemed to be the title decider. However, that was a cruel twist in the tale, as with 3 games to go, Liverpool hosted Jose Mourinho’s Chelsea, who were in between two Champions League semi-final legs. The Blues played a weakened side and Liverpool seemed to have control of the game until half time, when Gerrard let a pass from Mamadou Sakho roll under his foot and, instead of spraying out another cross-field ball, lost his footing and allowed Chelsea’s Demba Ba to slot past Mignolet. In the second half, Chelsea sat deep and Liverpool couldn’t break them down, and in the end Chelsea broke away and made it 2-0 later in the game. Liverpool had let the title slip through their fingers. 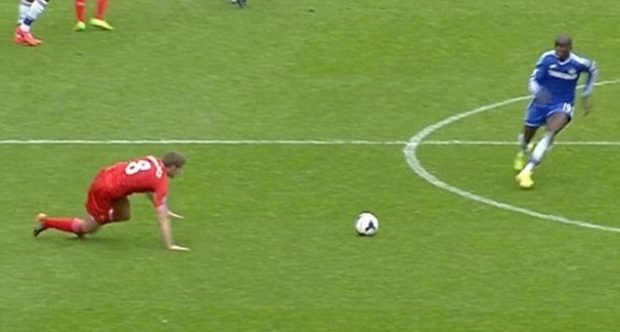