One of the most Stunning Premier League moments ever. By this point, Suarez was well-known for his antics and had already served an 8 match ban for the racism incident. Liverpool were playing Chelsea at Anfield, and with the home side 2-1 down, Suarez took a bizarre approach to dealing with Branislav Ivanovic, who had been marking him for the who game. Having given away a penalty to allow Chelsea to take the lead at Anfield, the Liverpool forward was desperate to redeem himself at the other end. Daniel Sturridge played the ball to his feet inside the area but Branislav Ivanovic got in the way and knocked it away to the edge of the box. While most eyes were on Steven Gerrard as he tried to put the ball back in, Suarez’s were instead on Ivanovic. He grabbed the Serbian defender by the shirt and sunk his teeth into his arm. He received a huge 10 match ban, but only after he scored a 97th minute equaliser to save a point for Liverpool. 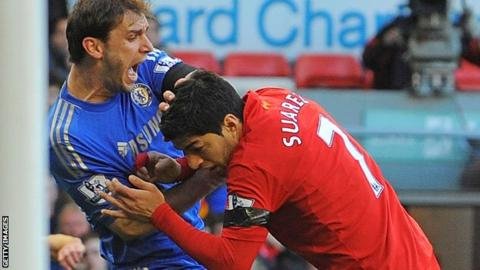