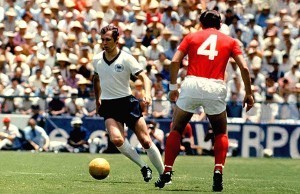 At the age of 70, Franz Beckenbauer is still very much involved in football. The German international led Germany to a successful host of the World Cup in 2006. He is currently a pundit forSky news German. He played for Bayern Munich most of his career playing for them over 500 games  before moving to the New York Cosmas and Finally to Hamburg before returning to the New York Cosmos where he retired.

Franz Beckenbauer is one of the few players to win the World Cup as a player and later as a manager.