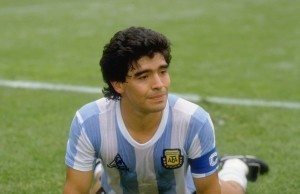 Tied with Brazilian player as the player of the century of the period 1900 to 2000. Th Argentine was known for his speed, balance on the ball and vision in front of goal. This player was what we called the perfect number 10 the only problem with this great player was his addiction to cocaine which brought up serious health problems after he retired from professional football.

Diego Maradona is compared to country man Lionel Messi as the best player of all time, Lionel Messi only needs to win the World Cup to surpass this footballing legend, he was close to that but lost to Germany in the final in the 2014 World Cup final in Brazil.